​​Ian Johnson was born and raised in the great white north.  That’s why you will occasionally see him eating exotic foods like ketchup potato chips, coffee crisp chocolate bars, and poutine!  He’s from the small town of Smiths Falls, Ontario, which you may not have heard of, but everyone there knew Ian even before he was on television.

Ian’s first television gig was as a guest builder on Discovery Channel’s Monster Garage.  With a team of builders, they successfully created the Monster Garage, “Santa Claus Parade Float.”  Ian was thrilled to meet legendary motorcycle builder and host Jessie James and is glad they keep in contact, so he can hear about Jessie’s latest projects.

Ian has spent a lot of time in front of a camera, but his role behind the scenes was more involved than many realized.  Besides being a host and builder, he was at times the technical producer for Trucks TV and Extreme 4x4 and helped plan and write the launch episodes for Muscle Car.  He appreciated his opportunity to work for television Executive Producer Joe St. Lawrence who is admired for his ingenuity, professionalism, and knowledge of the automotive television industry.

After years on television and working behind the scenes, Ian has extensive knowledge of the working operations of a TV production company. Ian is the founder and “Big Tire” of an automotive digital production company called Digital Lug.  The company currently produces four build series that air on Amazon Prime.  The line up includes:  Hands on Cars, Big Tire Garage, Hauk Machines, and Street Rods Ain't Dead. To meet the viewing needs of the mobile generation the shows are available on a variety of platforms.

Having enjoyed his appearance on television, Ian applied and was chosen to co-host Spike TV’s Extreme 4x4.  He had always admired the “how-to” format of The Powerblock and made sure to emphasize the “how-to” in great depths on the show.  Ian’s co-host was fabricator and competitive racer Jessi Combs.  Each week Ian and Jessi built one of a kind off-road vehicles and tested them on hardcore terrain.  Jessi always worked hard to encourage women to pursue their dreams and be the next trailblazer.  Ian is proud to support the Jessi Combs Foundation to help continue her legacy in her memory.

Becoming a licensed mechanic took some determination.  When Ian asked his high school guidance counselor how to become a mechanic, he replied that he wished he could tell him, but the principal of the school, who was Ian’s father, said he was not allowed to explain the process of becoming a mechanic to Ian.  Without hesitation, Ian drove to the high school in the next town and enrolled there.  Ian’s parents quickly realized he was committed to becoming a mechanic.  They embraced his choice and bought him his first set of tools. 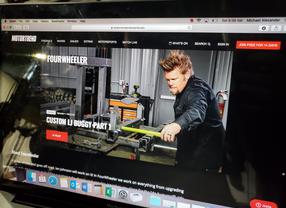 ​Ian has had a lot of jobs over the years, but all have had something to do with vehicles.  He started out as a licensed mechanic and was a graduate of ASEP General Motors Specialized Apprenticeship Program.  He used to be called “Mr. J” when he was a high school auto shop teacher.  Even then he undertook ambitious project builds with his students, developed a welding program at one school and wrote a safety manual for teachers.  Although his students were still in high school, Ian would lead build teams to create vehicles that competed against university teams in build competitions.  Ian has also been part owner and technical writer for Crawl Magazine, a hardcore off-road magazine. Ian has also written articles for Dirt Sports and Peterson's Off-Road. Currently, he owns and operates his off-road shop, Big Tire Garage, in Mount Pleasant, TN.  (The shop is not open to the public.)

Besides being someone who knows a lot about vehicles, Ian is the kind of guy you can count on to help.  It was on his commute from his teaching job that he stopped and saved a baby that had been in a terrible car wreck.  He received the Ontario Provincial Police, Commissioner’s Award for Lifesaving, for his efforts to successfully lift the vehicle off the trapped infant.​ 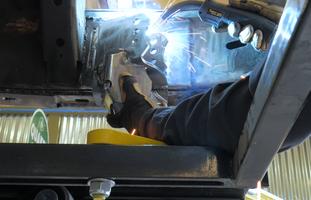 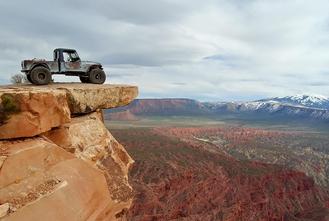 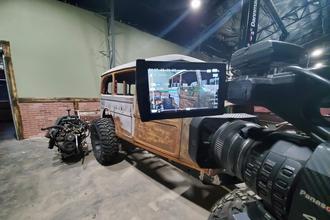 Besides running his business, Ian is the host of Motortrend’s show called FourWheeler. Season 1 and 2 were a success and Ian enjoys working with the talented crew from Brenton Productions. Season 1 included projects like the FourWheeler LJ and Season 2 includes a new favorite of Ian's, the FourWheeler Shop Truck.. Ian is glad to be a part of the Motortrend lineup and is looking forward to making Season 3.  When Ian isn’t making TV, he is often watching other shows on Motortrend.  He likes what he likes.